The Art of Being Emily 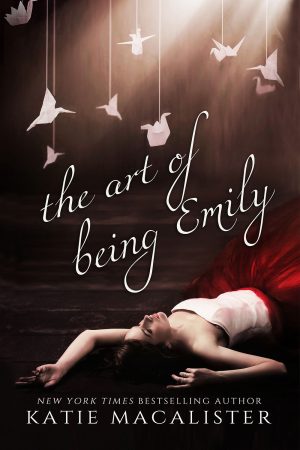 The Art of Being Emily

Together for the first time in one volume are the previously published first three entries in the Emily Series: THE YEAR MY LIFE WENT DOWN THE LOO, THEY WEAR WHAT UNDER THEIR KILTS? and WHAT’S FRENCH FOR “EW!”?

THE YEAR MY LIFE WENT DOWN THE LOO
When sixteen-year-old Emily’s family uproots her from Seattle to England right before her junior year, she has to adjust to a whole new lingo, new friends, and a serious lack of malls. Luckily, hunkalicious British boys do exist!

THEY WEAR WHAT UNDER THEIR KILTS?
Emily spends her month of work experience on a Scottish sheep farm, complete with wild sheep, her best friend Holly , and Ruaraidh the shepherd, AKA the Scottish God of Love who just happens to have eleven fingers. Kilt-watching, disastrous castle tours, graffiti spray-painted sheep, and tanning lotions gone horribly awry—it’s just another month in the life of Emily.

WHAT’S FRENCH FOR “EW!”?
Spring break arrives, and Emily is in Paris to learn French. With her trusty friend Holly at her side, an anti-pregnancy doll named Jack, and snogariffic boyfriend Devon arriving for a visit, Emily’s habit of getting into the most hilarious situations ever results in her storming more than just the Bastille. Will Paris survive her visit?

“Gripping, smart-alecky, shocking…and at the same time, tender. A brilliant debut by Katie Maxwell in the Young Adult Forum.” —KLIATT

“Fans of The Princess Diaries and other well written teen books will cheer this new entry to the scene.” —Huntress Reviews

“Girls will laugh, sigh and squeal aloud as they embark upon Emily’s journey.” —Romantic Times BOOKClub

GAH! My room is haunted! And not just haunted by any old run-of-the-mill ghost—oh, no, my ghost is an underwear pervert!

Dru, Dru, dear, sweet Dru, I can’t begin to tell you just how awful my life is. Well, OK, I can, and since I’m having to suffer, you, as my numero uno best friend, are going to have to suffer with me. Even though you’re halfway around the world from me, you’ll still suffer with me, won’t you? ‘Cause I’d do it for you. You know I would. I always get sympathy cramps for you, don’t I?

Where should I start in the catalog of horror that is now my life? Well, first of all, no, I didn’t talk Brother into getting us international cell phones. How I’m supposed to exist without the ability to text, or send you pictures of dishy guys via Snapchat, or Instagram, or any of that is beyond me, but you know how my father is—if there’s a buck to be saved, he’s dibsed it. I’m horrified to be stuck with only e-mail, but until I can talk some reason into the Ancient One, I guess we’ll just have to do this the old fashioned way.

Don’t be surprised if you get a letter from Brother or my mom saying I died (my obituary will read: Emily Williams, sixteen but looks eighteen, died Tuesday night of a broken heart after being torn from her friends and home in a mondo cool area of Seattle—conveniently located to both malls and water parks—and dragged all the way to England, a country that STILL HAS DISCOS!). This place is…well, I don’t want to say it’s awful, because there’re castles and cool stuff like that, and the guys sound really sexy with their English accents, but gah! Everything is so friggin’ old! It’s “Oh, look at that, Emily, that building is five hundred years old” this, and, “That piece of
Stonehenge has been standing in that spot for fifty gazillion years” that.

Well, duh! It’s a rock! It’s not like it’s going to sprout legs, buy a thong, and go to Tahiti for a windsurfing vacation, now, is it?
That was Brother who said the bit about the rock, BTW (the first bit, not the thong part). You know him—the man lives for old stuff like that. Needless to say he’s in seventh heaven here in Ye Olde Englande. So, anyway, I survived the move. Little tip from me to you: if your parents suggest moving you away from your rightful home to live in another country for a year, making you give up everything that’s important, do not, under any circumstances, agree to go sightseeing with them. Especially if your dad is a medieval scholar like Brother, ’cause I’m here to tell you that you’ll end up looking at nothing but stupid old rocks and buildings that should be plowed under to make room for more malls. You wouldn’t believe this, but I’ve been here two whole days, and all we’ve seen are libraries!

“Can’t we go see Windsor Castle?” I asked, thinking that Prince Harry guy might be hanging around there.

“Maybe another day. Brother wants to see a very old illuminated manuscript,” Mom said. “It’s very important to his research to see it in person.”

“How about the dungeon museum? I heard there’s one in London. That’s not only very cool, it’s historical, too. Bet there’s medieval stuff there.”

“Another time, Em,” Brother said, and went off about how wonderful the library was that we were going to. I tell you, Dru, I was going crazy being trapped in the car with them, travelling from library to library having to look at a bunch of moldy old books.

Anyhoodles, I survived the sightseeing (if I ever see another illuminated manuscript, I may just ralph), and Brother’s driving on the wrong side of everything, and yesterday we arrived here at Chez Williams AKA the Haunted Mansion.

“What’s wrong, Brother?” I asked when he pulled up before a creepy, old, creepy, dirty, and did I say creepy? house that looked like it should have been condemned.“Are we lost? Out of gas? Did the engine fall out?”

“Nope,” that horrible man who spawned me answered in a cheerful I can’t wait to see this antiquity sort of way that for the last two days had made the flesh on my back crawl. “This is our home away from home for the next year. Isn’t it charming?”

Charming? The Amityville Horror looked more welcoming than the monstrosity that slouched at the end of the drive. Honest to Pete, Dru, it positively reeked of old!

“It certainly is different than anything we have at home,” Mom said, ignoring my stand-taking in that mom sort of way older women have. [The score so far—Emily: 0, Parental Units: 2.] “When did Professor Carlston say it was built?”

“In 1588, by Dracula, no doubt,” I answered, gripping my purse firmly. If anything creepy even thought about grabbing me, I’d nail it upside the head with twenty-two pounds of makeup.

“Now, Emily, you know that Vlad the Impaler was born in 1421. It would have been impossible for him to build this house in 1588,” Brother said. “Ten points if you can tell me during what empire Vlad ruled Wallacia.”

I am warning you right here and now, Dru—if your father gives you even the slightest reason to think he’ll ever become a scholar, kill him. I know that seems harsh, but honestly, the historical pop quizzes alone are grounds for divorcing him as a parent. “Can we skip the pop quizzes and get right down to the exorcism?” I asked as The Parents hustled me toward the house. It’s huge, I mean really huge, and old, and black and moldy-looking, with all sorts of windows that poke out and glare down on you. “Do either of you have any holy water?”

“It certainly does have atmosphere,” Mom said.

“How about a spare crucifix or two?”

“Emily…” Brother said warningly. He did something to the front door and it squeaked open. Inside was a whole lot of black. I swear you could hear the bats rubbing their little batty paws together and cackling at the fresh dinner walking in.

“A Bible? A What Would Jesus Do sticker?”

“Not now, Em,” Mom said, pulling me in to the abyss. The door slammed shut behind us.

Brother eyed me. “She didn’t get that smart mouth from my side of the family.”

Mom smiled and patted him on the arm. “It’s a defense mechanism, dear. Girls Emily’s age feel it’s vital to appear flip on the outside even though they’re riddled with insecurities on the inside.”

“Are you sure she’s mine?” Brother asked Mom in what passes for Old-People humor. “Is it too late for a paternity test?”

I’ll save you from the horrors of the grand tour, as the Sperm Donor called it. Let me just say that the house is one big creepfest. If there aren’t hockey-mask-wearing, homicidal, deranged ax murderers living in the basement, you can paint my toenails and call me Sally. And you know I hate the name Sally.

Must go. Brother just bellowed upstairs that dinner is on, and it’ll probably take me at least a week to find my way down to the ground floor (that’s first floor to you and the rest of the world). I’ll tell you about the underwear ghost later. Oh, yeah, note my English e-mail addy. Oh! Oh! Oh! I picked up a magazine at the airport that said Liam Hemsworth was in England filming a new movie—can you believe that Brother had no idea who he was?

“He’s only the hottest thing that ever came out of Australia!” I told him, then made him look at some Liam fan websites. Brother pretended to stagger away after he sat through the video by the girl who did the Liam interpretive dance, which was just so funny I forgot to laugh. Sheesh! He makes me look at old books for two whole days, then squawks about a little Liam-viewing?

Oh, get this, you’re going to die—the studio that Liam will be working at is only ten miles away! Eat your heart out, you poor Hemsworth-less thing, you.

P.S. How’s the leg? What happened to your Sim Zombie family? Did Morticia Zombie marry Ted Townie? YOU HAVE TO TELL ME!!!