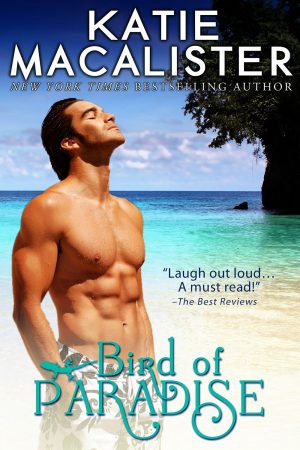 Take one mysterious man who isn’t what he seems, add in his monstrously large cat, finish with a body-image-challenged heroine named Hero, and you get Bird of Paradise, a novella featuring Adam the private detective, Hero the undercover journalist, and Jesus the cat, who may or may not be depressed over his neutering.

Eden just isn’t a garden; it’s also a reality TV show bent on pairing up single contestants. Trapped under false pretenses on an exotic island named Mystique, Hero tries desperately to stay focused on her job and ignore the increasingly tempting Adam, but not even this modern-day Garden of Eden is perfect, and sooner or later, she has to admit the truth: he might not be perfection itself, but he sure makes her life a paradise.

Note: This novella was originally published in the Heat Wave anthology in 2003.

“I’m sure most of you are familiar with the orange game,” the Eden host Asterisk said a short while later. Short, balding, famed for his comedic roles, he seemed to enjoy performing before the crowd of contestants, cracking all sorts of terrible puns and jokes riddled with double entendres that had the crowd howling and applauding wildly.

The cameras filmed every moment of it.

Asterisk held up an orange. “The object of this game is to pass the orange from one person to another—without using your arms or hands, and without letting the orange touch the floor. Each table will form a line, man, woman, man, woman, and pass the orange from one person to another. Points will be awarded to each contestant who does not drop the orange. So here’s your chance, ladies and gents, to get a head start on the point count. Ready? Maestro, mambo music please!”

Loud pulsing music poured out from the speakers overhead. Cameramen and sound people moved into place as each table obediently formed a line. Hero stood behind Adam (who, to her surprise, did not hurry to take a place next to Sally), and in front of a man with a skull and crossbones earring and tattoos of flames licking up his wrists.

It was going to be a long night.

True be told, she admitted to herself a few minutes later, it was an amusing game. The first person in the line held the orange under her chin, while the man next to her more or less embraced her in order to get close enough to try to take it from her. She giggled as he nuzzled her neck, trying to capture the orange under his own chin, he laughed when she writhed against him, trying to push the orange toward his neck, the cameraman tightened his shot on the two in a seemingly very intimate embrace, and Hero watched it all with her breath caught in her throat. Her eyes turned to where Adam stood in front of her, applauding when the man finally retrieved the orange. She was going to have to take the orange from him. She was going to have to stand very close to him, her arms on his, her jaw brushing his to take the orange.

She had to be mad.

The next woman in line was Sally. She gave it a game shot, but dropped the orange. So did Greg, but Hero suspected that was because he had no neck to speak of, and thus no way to hold the orange. A short strawberry blonde woman took up the orange next, and giggled in Adam’s ear as he doubled over to try and retrieve the orange from her. With some careful maneuvering, he managed to get it without too much trouble, and turned to face Hero with the orange clamped down between his chin and collarbone.

“You can do it, it’s easy,” he encouraged her, his words somewhat slurred because he couldn’t move his jaw. She stared into his glittering blue eyes for a moment, and wondered if the laughter she saw in there was directed at her, or at the silly situation. It didn’t matter, she told herself as she stepped up to him, placing her hands on his arms as she leaned into his chest. All that mattered was that she get the points. The points were everything. She couldn’t afford to be left behind, not even with Adam as a ringer.

She had no idea what brand of aftershave he used, but she highly approved of it. The scent of him, part spicy aftershave, part something uniquely Adam, teased her senses as her jaw brushed his. She angled her head to capture the orange under her chin, ignoring the fact that her breasts, pressed up against him, were on fire with the contact. His breath was hot and rapid in her ear as his hands came around her waist to steady her. She could see the pulse beat rapidly in his neck. The scent of him, the heat from his chest touching hers, the slight abrasion of his whiskery chin against her neck, and the nearness of his mouth to an ear suddenly turned into a highly erogenous spot almost undid her, but the flicker of light as the cameraman moved to a better angle reminded her that they were being filmed.

She bit back the desire to lick the pulse point on his neck and clamped her chin down on the orange. Adam groaned slightly and lifted his head to release the orange, but her grip wasn’t as good as she thought it was. The orange slid from beneath her chin and started to drop. She shrieked and slammed herself against Adam, rocking him backwards. He regained his balance, his hands tight on her arms.

“Of all the ignominious positions,” she grumbled into his chest. She was half crouched, the orange caught in slightly above her breasts, pressed into his stomach.

“Are you all right?” Adam asked, his hands warm on her shoulders.

“Yes, fine, the bloody thing is on my…it’s between my chest and your stomach.”

The others in their line called out encouragement and advice.

“If you slide down slowly you should be able to catch it under your chin again,” Adam said, holding her firmly to him. She knew it was so the orange would not continue its downward path and not because he wanted her body pressed against his, but she couldn’t help enjoy the contact.

“It’ll be easy. Just move slowly,” he told her.

She nodded into his chest, took a grip on his waist, and started to slide slowly down him. She almost had it under her chin when Adam jerked and yelled, “Jesus, no!”

The orange dropped six inches. She caught it by pressing it against Adam with her cheek. Breathing heavily with the affect of being so close to him, and the spurts of adrenaline that shot through her every time the orange dropped, she rolled her eye to the side to assess where she was.

Her face and the orange were pressed against his crotch.

“Oh, Lord,” she swore into his genitals, wondering if her life could get any worse.

A loud crash indicated a chair was turned over, but it was the laughter and calls of the people at her table that told her what was going on behind her back. Adam had tied the cat’s leash to the chair while he was participating in the games. Jesus didn’t seem to mind since he was curled up asleep after his meal of snails, but evidently he had woken up and suddenly felt the need to join in the fun.

He dragged the chair over to where Hero was face to genitals with Adam. She sighed.

“Any brilliant ideas how I’m to get it now?” she asked him, her words slurred because of the orange pressed against her cheek. She absolutely refused to look at his crotch. She refused to notice how strained his zipper looked, or acknowledge that his fingers were biting into her arms and his breathing was just as erratic as hers.

“You’re going to have to turn your face a little so you can get it under your chin,” he said, his voice hoarse. “Damn it cat, I told you not to come over here.”

She closed her eyes for a moment, ignoring the people laughing at her, at the cat, at everything, and tried very hard not to dwell on what turning her face toward Adam’s groin was going to mean. The points, she needed the points. The points were everything. She had to do this.

A hard head butted her hip where she knelt before Adam.

“Leave her alone, cat,” he growled above her. Jesus paid no mind his owner and rubbed himself along Hero’s thigh in an obvious attempt to get her attention.

She ignored the cat as she warned Adam, “I’m going to take the orange now.”

A second cameraman joined the first. She ignored them as well.

She smiled a grim little smile to herself and simultaneously rose a little and turned her face inward until her mouth was pressed against his belt, and the orange held firmly against her voice box. She lowered her chin carefully. Behind his zipper, Adam twitched. She stopped for a moment, feeling an answering twitch within herself, deep down where the heat pooled uncomfortably in her womanly parts. Deciding it was best to pretend the twitches never happened, with careful movements she clasped the orange between her chin and chest and pulled slowly away from him. The orange remained solid under her chin. She gave a heartfelt sigh of relief, and with one hand on Adam’s belt for balance, started to rise to her feet.

He jerked her head back, almost releasing the orange from her hold.

“What the…damn. Hold on a minute, your hair is tangled on my belt buckle. No, Jesus, leave her alone—”

In the end it wasn’t her hair caught on his belt, or Jesus crawling over her in an attempt to get her to pet him, thereby tangling her legs in the leash that led to the chair he dragged behind him, it wasn’t even the cameraman who squatted down in front of her, laughing so hard he had difficulty filming her as she crouched red-faced next to Adam’s groin while he worked her hair free. It was a small, insignificant thing that caused her to drop the orange and lose fifty points she well needed.

The gecko evidently decided that as her head was higher than the cat’s, it would provide a better vantage point for insect sighting. The little creature leaped off of the cat and scurried up her arm and onto her head before she realized what it was doing.

An hour later she sat in a chair outside her cabana on a wooden lounge, rubbing the sore spot on her head. Hopefully it wouldn’t take long for her hair to grow back, but it wasn’t really the loss of a shilling sized clump of hair that pained her. No, it was the footage the cameramen had shot, no doubt gleefully, of her screaming and racing around the table batting ineffectually at her head while Adam chased after her, telling her to stand still so he could remove the gecko, finally achieving that goal when she tripped over Jesus and his chair, sprawling out on the ground in front of everyone with her dress hiked up almost to her bum. The TV audience would eat it up.

Her shoulders sagged until her head drooped down onto her hands. She didn’t think life could get any worse, but she had no doubt it would. Fate was often like that.