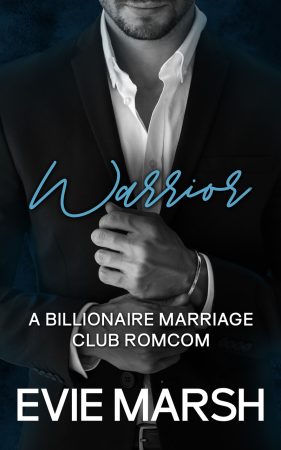 Would you be willing to become wife number five?

Mariah Summers may have a crush on her former boss Evan Armstrong, but that doesn’t mean she’s going to walk the path of his previous four wives. Not when the Billionaire Marriage Club hooks her up with an eccentric Spanish artist. Unfortunately, the artist is a bit too eccentric, and Mariah finds herself with the chance of a lifetime – to marry the man she’s had a crush on for years.

Evan is as lonely as he is successful, but this time, he’s determined to do things differently: he won’t take his time getting to know his next partner, won’t heed common sense and caution, and won’t think before he acts. So when he sees Mariah being dumped by a deranged Spaniard, he steps in and demands the BMC add her to his list of potential mates.

Evan knows the minute he sees Mariah that he’s made the right choice – the problem is convincing her that although she may be a warrior, she needs him… almost as much as he needs her.

This fast, fun, and sexy short story entry in the Billionaire Marriage Club series will leave you panting for men who may look like they have it all, but really need the one woman perfect for them.