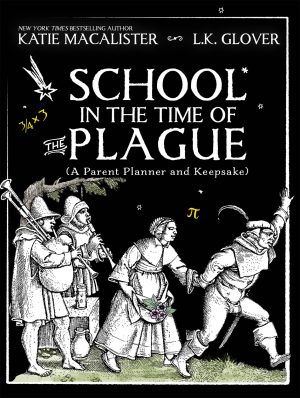 School in the Time of the Plague

A Parent Planner and Keepsake

Signup for the Katie Mac reader group to get all the news and contest info!

The long summer wait is over, and finally Gregory’s story can be told! Hie thee to the book’s page for more information.

Rather than have one contest that people enter over a period of a week or two, I’ve decided to hold one contest for each Art of Stealing Time ARC. I have thirteen ARCs to give away, so beginning July 18th, one contest will run each day until all thirteen ARCs have been given away.

To enter today’s contest send an e-mail to contest@katiemacalister.com with the following:

Note: contest ends at midnight Pacific Time on Friday at 12 am. Any entries received after that time will be discarded.

A winning entry will be randomly drawn the following day, and a signed Advanced Readers Copy of The Art of Stealing Time will be sent to the winner.

So, I promised details on the new book that I’m writing now, and you shall have them! The newly settled-upon title is The Truth About Leo, and while the hero is not Noble’s son Nick, it will have both Nick and Thom in secondary roles.

The hero of the book is indeed named Leo, and the heroine is a half-Danish woman named Dagmar. Both Leo and Dagmar march to the respective beats of their own drummers, and although I’m not halfway through the book yet, I am having great fun with them.

Leo will be out in August of 2014, following the re-release of Noble Intentions, Noble Destiny, and The Trouble With Harry. I have no cover yet, but you know when I get one I’ll post it.
As for what’s coming up after that…we’ll see. I’m not sure if I want to write a new dragon book, or another Karma Marx book, or a new idea that’s tickling at the back of my brain. We’ll just have to see where the muse goes once Leo is finished.